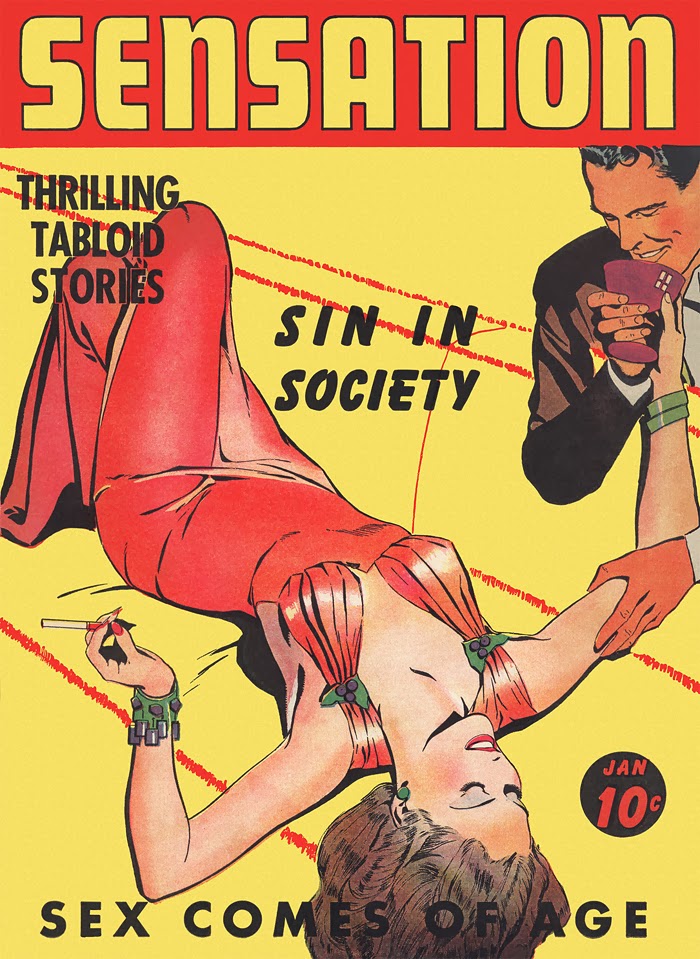 
So I'm putting off that post on Dr. Seuss in Judge a bit until I get a couple more issues scanned and instead have a scan for y'all tonight that I know some of my readers will be interested in, the second issue of a very neat-o little magazine, Sensation. The first issue remains my most popular post, as the internet is apparently dying to know, "Should Wives Be Spanked?"

Matters of domestic discipline aside, W.B. Seabrook's first installment of "Astounding Secrets of the Devil Worshipers' Mystice Love Cult" on infamous mystic and miscreant, Aleister Crowley, drew much interest, and I'm happy to report the second issue continues the tale.

Sensation revels in its tabloid status and was seemingly aiming for broad appeal with a mix of psychology, true crime, advice, and romance geared to a variety of tastes. My hunt for a second issue paid off, as it indeed exists, and is similar in charming design to the first issue in the line-drawn cover and extensive mix of red and blue illustrations and photos throughout. Big thanks go to Doc Oldschool for the edits on the issue. He turned the beatdown copy I got my hands on (the only one I've seen) into a fine lookin' scan.

I'll lead with and go ahead and post the entire Seabrook on Crowley article for websurfers and then clip out some of the funky graphics. Since I posted the first part of the article, I've come across various writings by Seabrook who it turns out was a very peculiar character in his own right. Chapter 2!:


A scene of sadism in red inks, yowzah. I'm not sure who did these wild illustrations. No signature, LOL.


To be continued in the next issue?? Does a third issue exist? One wrinkle in my search is that there is a 1941 series I have the first issue of also called Sensation, but as far as I can tell it is from another publisher and not quite in the same vein as these first two issues. It certainly is different graphically, more in line with the standard graphics you'd find in a photo mag. Sensation v01n01 (1941-11) cover:

After the Crowley article, my favorite story concerns Dillinger's "Lady in Red," Anna Sage. Sage fingered Dillinger for death but Fred Menagh speculates on what has happened to Sage's mind and body since she was deported back to Romania in spite of her central role in taking down Dillinger. "Cursed By a Gangster's Ghost?" A bony red hand over a blue photo of Dillinger points accusingly at Anna Sage. Seemingly on the run from the ghost of Dillinger and stool pigeon infamy Sage seemingly driven made blackmailers and those who would have revenge in spite of multiple cosmetic surgeries. Again, I'll post the whole article. There's so much myth surrounding Dillinger and karmic ill will for Sage, I have no idea what parts of Menagh's story are true. I would like to see a more trustworthy account of what happened to Sage after her deportation, but it's hard not to get the sense here that things did not go well for her.

Other interesting articles - Mildred Luber writes about the Tahitian exile of Anne Chevalier, star of F.W. Murnau's Tabu, denied permanent residence in the U.S. "Let Us Have Truth" is a call for a little common sense in sex ed. "The Last of Brigham's Boys" is an mid-century tabloid take on the home life of Brigham Young. Sin in High Society by Lawrence Gould gives an explanation as to why the rich behave so badly. "World's End" speculates on what will happen as Earth and the Moon age and gravity works its wonders. I'll leave you with a couple of images from the issue, enjoy, and I'll catch you kids next trip on the time machine -

The article on the World's End posits that at some point the Moon and the Earth will align so that one side of the planet will have the Moon in the sky all the time and the other will never be able to see it, hmm.


Love this graphic and article on how private eyes catch philandering spouses on wax. The writer,female,casts the blame on the womens! Surveillance technology in its infancy.

Posted by darwination at 9:22 PM

Wish I had all this back when I did my Crowley Scrapbook in the 1980s! Seabrook is the subject of a recent graphic novel biography. I'd love the book on him by his ex, Marjorie Worthington, but it goes for ludicrous prices.