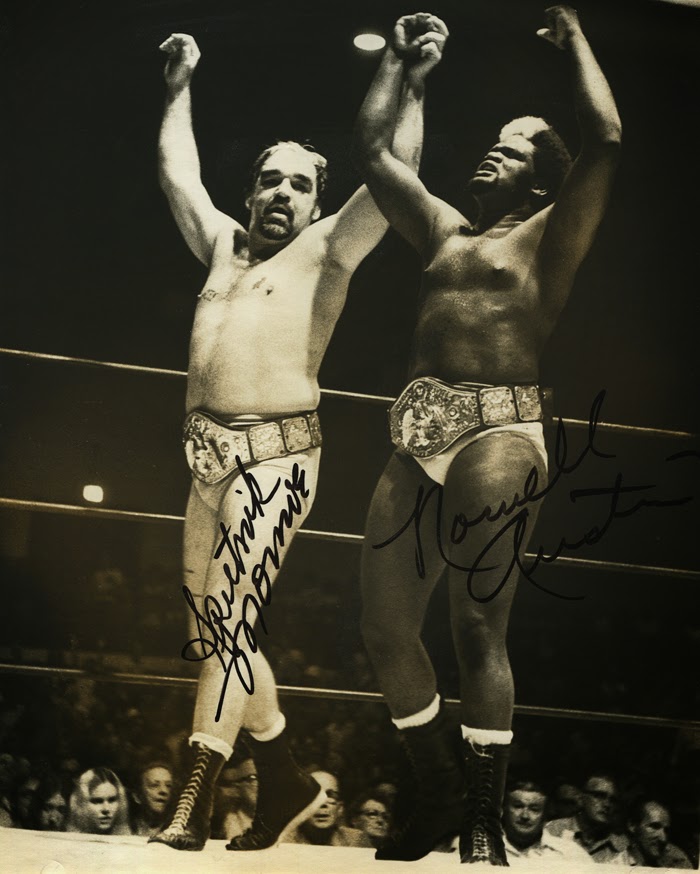 I got a nice image in my e-mail this morning from the folks behind Memphis Heat reminding me that it is National Sputnik Monroe Day today. March 24th belongs to Sputnik, so, indeed, Sputnik shall have his day.

I found the above photo signed by Sputnik and Norvell Austin early last year on eBay for under 10 dollars. What a treasure. I'd been meaning to share it here and what better occasion.

The photographer is Josie Ritter who took this photo as a young woman in Tampa between 1971 and 1974 in a collection she now calls "Working Class Opera". When I got the photo, I couldn't find anything about her. Since then, The Tampa Tribune included some of her work and some stories of her time as a wrestling photographer (she was as interested in the fans as she was the wrestlers) in a cool piece on Florida wrestling here.

I wrote what might be my favorite post here at Darwinscans on the life of Sputnik Monroe and his importance in Memphis History back in 2011, and I concluded with the story of Sputnik's Memphis comeback in the early 70s tag-teaming with Norvell Austin in one of the first interracial heel tag teams in the South. Sputnik Monroe, who had already been instrumental in integrating Memphis' public spaces, would draw crowds once again, stirring redneck hate by preaching love of all races and even letting slip the rumor that Page was his son, absolutely brilliant.

So, R.I.P., Sputnik. You made Memphis and the whole world a better place. Some heels do go to heaven.

Bonus - the nice retro graphic I got in the mail this morning, the pulp feel fits right in here at Darwinscans.

Posted by darwination at 8:16 PM

The choice is obvious, bro...
except for those who think
the LIAR tells the TRUTH.
Dunno why millions deny the obvious.
Nevertheless...

Thanks for sharing. Always a pleasure to read.