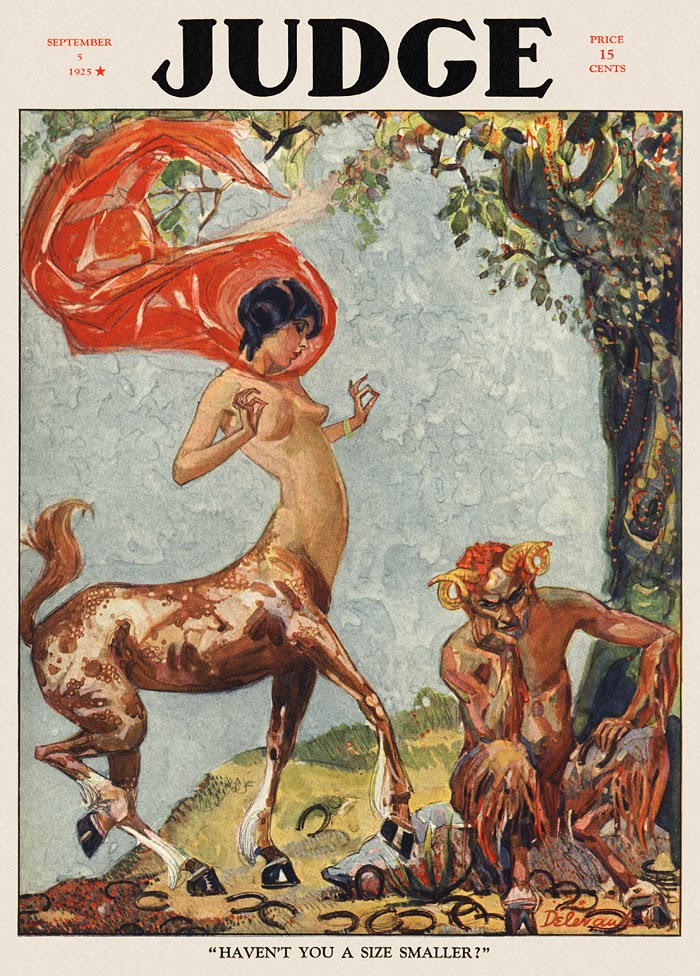 A gorgeous watercolor by Sidney Delevante - this poor centaur can't quite find the right shoes. "Haven't You a Size Smaller?" My otherwise-sensible wife (and who am I to point fingers with boxes of old magazines about) loves shoes, so I never tire of jokes about girls and their footwear.

I couldn't find much information about Delevante. He did a number of covers for Judge in this period and would go on to become an art professor at Cooper Union. I've seen his illustrations in Life a bit earlier than this issue as well as some adwork he did for French's Mustard in the late 20s.

I hadn't planned on scanning this issue for you all but happened to have it out along with the Musical Number from last post, so, adoring the cover, I went ahead and did a quick scan. I'll write a short post on Dr. Seuss and his work for the magazine in the late 20s and early 30s next time, but for now I'm just going to put up some of the highlights from today's ish. There's no use of color printing on the interior pages that helped to make the last issue so charming, but there's still all sorts of fun cartoons and content.


Prarie Papa. I can't quite make out the artist's signature.


Flapper with dog from Carl Anderson.

I love this. It's funny what people will ask of certain professions they won't ask of others. From a fantastic artist, Jefferson Machamer. I've got a nice cover he did for College Humor I'll post when I get to that title.


More Machamer. Illustrating theater reviews by George Jean Nathan, more famous for his work with H.L. Mencken on one of the most notorious magazines of the day, The American Mercury.

Like those New York World FUN sections I posted recently, Judge invites you to scribble in their magazine and finish a Milt Gross cartoon in a contest. I love when magazines invite the reader to doodle. The previous week's answers (an ad on the same page announces the beginning a weekly crossword puzzle starting with the next issue):

Advertising spotlight - before the behemoth that is Amazon, there was the Sears catalog which was hugely influential in creating a national retail market, especially in rural America.

I recall a few of the more famous delta bluesmen got their first guitars from this catalog. Harry Crews (RIP) even credits the catalog as wellspring for his imagination. From an interesting documentary from 2003, Searching for the Wrong-Eyed Jesus, here's Crews (who I plan to write a bit about in an upcoming post on cockfighting magazines) elucidating his interaction with the Sears Roebuck catalog:


Enjoy the issue! Back next time with a post on Dr. Seuss in Judge, a post likely to surprise those unfamiliar with Seuss' early work as well perhaps my personal take on Seuss' overwhelming popularity in school and library programs.
Posted by darwination at 9:53 AM