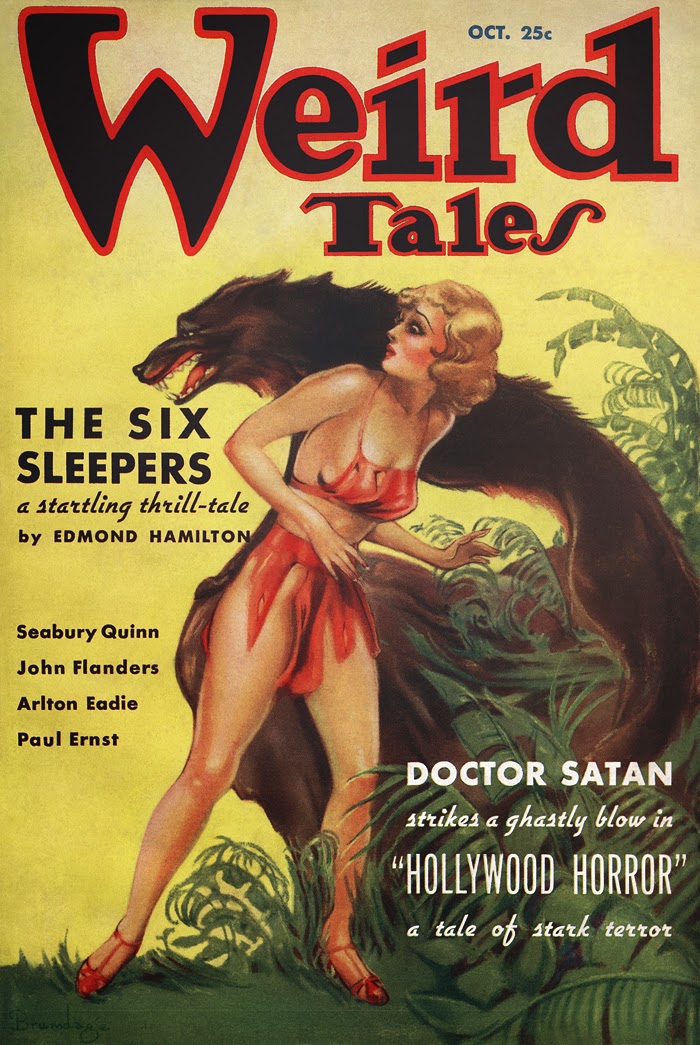 Aooooooo, pulp lovers, I've got a fresh scan for you all tonight of a great issue of perhaps the most famous of all pulps, the unique magazine, Weird Tales. Best known for publishing many works from H.P. Lovecraft and Robert E. Howard, Weird Tales is absolutely the most sought after pulp by the largest number of pulp collectors. The number of issues that have been held on to by collectors and the prices they command on eBay are testament to the cult of devoted followers the magazine has even after all these years. Indeed, though the magazine has changed publishers many times, the newest incarnation is alive and kicking, and you can find out about what's happening now at Weird Tales here.

Beyond Lovecraft and Howard, the magazine published many other writers. Weird Tales featured articles from Houdini in the early issues. Tennessee Williams published his first story in Weird Tales in 1928. More frequent contributors include Robert Bloch, Ray Bradbury, Arthur Burks, Ray Cummings, August Derleth, Paul Ernst, Edmund Hamilton, Henry Kuttner, Murray Leinster, C.L. Moore, Margaret St. Clair, Wade Wellman, and many, many others. You can find a basic history of the magazine at the Pulp Magazines Project here. Also, the Project hosts a number of scans of issues from this same classic period as tonight's issue which can be viewed or downloaded in .pdf format here. If you join the yahoo pulp scans group which I've mentioned on my blog before, you can find links to the approximately 80 issues scanned thus far (of which yours truly has done a handful). And while I'm doling out links, here's a helpful page (in French, though even one as Franco-impaired as myself can use it) that indexes every Weird Tales issue.

I'll get to the contents of the issue in a moment, but first I'd like to share some thoughts on the cover artist, the one and only Margaret Brundage. The original pastels of the cover for this issue recently sold at Heritage for near $20,000, a considerable sum for a pulp painting (a number of recent auctions show new records being set for prices of pulp art). Here's the original: :

It's always interesting to see how colors are affected in the printing process. I'd also note that physical copies of this particular issue don't age very well, as even on well preserved copies the yellow background tends to adopt a grimy or reddish tint.

Whenever I see this cover, in my mind I pair it with another famous issue, March 1933, The Thing in the Fog:

The original painting image from Heritage:

The original of this painting sold in the same auction as The Six Sleepers in which a number of her paintings were sold from what I assume is Charles Wooley's collection which he describes his acquisition of in a short article in the excellent new book by Stephen Korshak and J. David Spurlock, The Alluring Art of Margaret Brundage - Queen of Pulp Pin-Up Art. The book is very well done, reprinting excellent restorations of all of Brundage's covers for Weird Tales and includes interview material as well as a nice biographical essay on the Chicago bohemian scene of the 20s and 30s of which she was a part.

I like the title of the book in that it identifies Brundage as a pin-up artist and also the use of the word alluring, as I find her use of color absolutely seductive. I knew I was going to enjoy the book instantly upon reading the perfectly-selected quotes on the back which speak to the ongoing debate regarding Brundage's art. I'll scan and crop out part of the back cover here to show what I mean:


So here's the NYT and Sprague de Camp (the author of the persistent but false rumor that Brundage used her daughters - of which she had none - as models) speaking to to the exploitative nature of the covers. He-Man Robert Howard praises her covers for his stories, while his friend H.P. Lovecraft (truly a repressed fellow) is so irked by her work he would supposedly tear off the covers so he did not have to look at Brundage's naked ladies. Playboy states she may have been some sort of genius and John Petty at Heritage calls her a huge talent and one of the most important artists in pop culture History, while writer Clarke Ashton Smith wrote "The current W.T. design, though pleasing enough in color, is curiously suggestive of a Christmas card! [...] Mrs. Brundage [...] has about as much genuine feeling for the weird as a Jersey cow is likely to possess." and "Query: why does Brundage try to make all her women look like wet-nurses? It's a funny, not to say tiresome, complex" (from Brundage's wiki page, letters to HPL and R.H. Barlow). Indeed, a couple of friends from the blogosphere here (I'm not calling out any names, heh heh) have disparaged to me her technical talents as an artist and wonder at the prices her paintings are fetching.

For my part, I think her art is wonderful - sumptuous, beautiful and terrible, sexy and weird, and totally unapologetic in its fetishism. Brundage no doubt moved a lot of magazines off of the racks. The strong reaction her covers provoked in the authors of the magazine are mirrored in the magazine's letter columns. I'll clip out a few reader letters from this very issue to show what I mean.

C.L. Moore (who has a story in the issue) praises a recent cover:

she means this one, not really a great Brundage imho

while another reader seems to teeter between praise and condemnation. Just the right amount of salaciousness, please!

A third letter from this same issue is all for the nekkid girls and perhaps gives Lovecraft an idea that might ease his discomfort, LOL!

Love it or hate it, her art stirs a reaction. Sex sells. So does controversy. So do bright colors...

As for the charges of sadism and exploitation, I'll point out that Brundage's females aren't always the victim of the lash, they are also the perpetrator and sometimes it seems a willing participant. I read somewhere (maybe in the Alluring book and please never take anything I write as fact) that the WT readership was 25% female. I daresay, I suspect that Brundage's paintings attracted female readers. Whether a woman brandishing the whip is empowering, I have no idea, but I'll go with yes (look at her redheaded wolf-woman above!). Some examples of women with the lash - also in a couple of these you can see there's no wonder that some see homoerotic overtones in her paintings:

Here, I'd note that the later shudder pulps would far, far outdo anything Brundage ever did in the cruelty to women department. Perhaps some time in the future I'll do a post on Weird Menace. They don't tend to be my cup of tea and are not really an area I collect, but they are absolutely mind-boggling in that they were published in the 30s and were clear predecessors to modern slasher films. Blake Bell and Doctor V.'s great new book on Martin Goodman's publishing empire even goes so far to label them "torture porn" which might be going a little overboard. But I digress...


I'll put up a couple more Brundages while I'm at it. The most famous Brundage? often referred to as "Batwoman," kinky:


And my favorite (if not the "Black God" cover I posted back when I wrote about La Vie Parisienne):

Finally, one last Brundage link, Weird Tales has a chronological gallery of all her covers up here.

Oof, I've been typing a while and am flagging, I better get on to the stories! A cool issue, not solid front to back, though that's what you can expect from most pulps, even during this excellent period of Weird Tales.


I won't get into too much as far as story content. I seek only to entice, as I'd hate to spoil any stories. The mag opens with probably the strongest story which Brundage's painting illustrates (though I'm not sure she got the wolf right), Edmund Hamilton's The Six Sleepers in which adventurers from different time periods find themselves united in the future. I'll go for a movie style pitch ala The Player (1992) and say this one is Time Bandits meets At the Mountains of Madness.

The splash from artist Vincent Napoli:


Next up is a Doctor Satan tale, "Hollywood Horror." Doctor Satan is a strange hero in that he is in fact not a hero but a rather sinister villain. In our tale he visits Hollywood, sowing terror on a beloved starlet as well as upon Hollywood studio execs. I think we're supposed to be cheering for the bad guy. Napoli's rendition:


Followed by a C.L. Moore Northwest Smith story in which Smith is lured into a bad situation by a siren that is not what she seems.


Followed by a tale of Seabury Quinn's witty and temperamental French detective, Jules de Grandin. I always laugh reading these. Quinn was actually more popular than Lovecraft or Howard in his day. I, for one, certainly enjoy his stories. The best of the Napoli illustrations in the issue, I like the wandering hieroglyphics...


Followed by The Mystery of the Last Guest which wasn't great but reminded me in setting at least of the recent film by Ti West, The Innkeepers (2011), which I wholly recommend to lovers of ghost stories. I didn't read the serial, "The Carnival of Death (part 2)" because I don't have the first part which is one reason I don't tend to collect some pulps that have a lot of serials. The splash for the serial illustrated by Jack Binder:

The serial is followed by the Binder Brothers' "In a Graveyard" which reminded me of a comic book script in its brevity and ending.

The Binders' tale is followed by a short ditty on vampyrism, "The Amulet of Hell," which is a reminder never to go into a curio store which those who grew up with Gremlins (1984) already know.

Lastly, there's a reprint story by Arthur Machen who was featured in a recent issue of Rue Morgue that piqued my interest about his work. I didn't quite "get" this story but mean to read some of his longer works that were so influential.

a c2c moment. Brundage must have attracted this advertiser for Spanking Stories. Also, pulp author and REH agent seeks writers to represent:


And a picture a friend sent me. See, women did in fact read Weird Tales, proof! Sadly, I've no clue as to the context of the photo...The issue looks oft-handled.


A link to the Canadian edition of that issue which was one of my early scans here.


I hope to get another post in before all the holiday hubbub. If not, see you for another periodical installment in the new year.
Posted by darwination at 9:01 PM