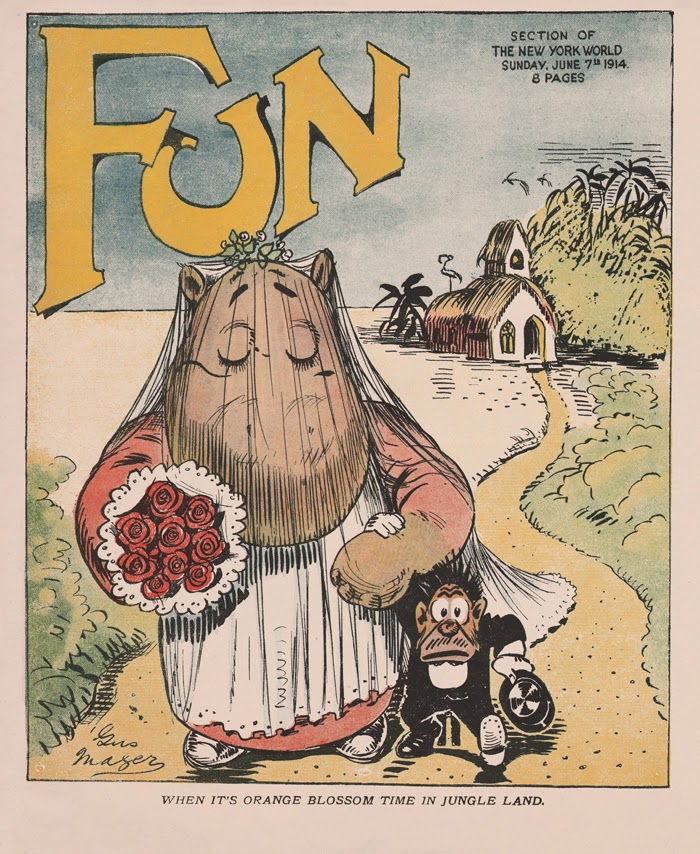 OK, scanlovers, Old Man Winter makes a habit of toying with my holiday travel, and this year is no different. I thought I'd make use of the extra down time and get a quick post up of some New York World FUN sections to coincide with the 100th anniversary of the crossword puzzle. Today, Google has even honored the puzzling pastime with a special logo:

Wikipedia has an image of the first word-cross ever, invented by Arthur Wynne, a journo from Liverpool, and published in the New York World on December 21, 1913.

I've seen a good number of press pieces on the anniversary. Here's just a couple of examples:

From NPR, a piece on the puzzle and a reworking of the first crossword ever. Snarky commentary in the comments section included. If reading the average comments section on any given news article on the internet doesn't destroy your faith in humanity and the life-changing potential of the internet, then you're reading better webpages than I am, nyuk nyuk

An article from the Express in the UK that gives a little more information. The author points out that we Americans didn't appreciate the puzzle but that it blossomed in the UK and that English crosswords are just so much better than American crosswords. Those limeys are a hilarious breed, I swear.

Anyways, I don't actually have the FUN section with the first crossword, but I do have scans of some sections from the approximate time period and want to dispel the notion that the Fun section can exactly be equated with what we know as the comics section (per that Express article and others I've seen) because it is a different bird altogether that mixed jokes, cartoons, various types of puzzles and advertising in something very different from what we think of as the comics today.

The New York World was published by Joseph Pulitzer from 1883 until his death in 1911 (control passed to his sons). Pulitzer pushed progressive causes like tenement reform and sought to engage readers from the lower classes. This push to increase his readership base led Pulitzer in 1895 to purchase a four color press and launch a color supplement featuring Richard Oucalt's Yellow Kid whose adventures took place in and appealed to the dwellers of New York's mean streets. The Yellow Kid is where we get the term yellow journalism wherein sensationalism and profits take precedence over proper journalism. And yet the Yellow Kid was simply an appreciated slice of life for many New Yorkers. Modern critics might levy charges of caricature, racism, classism, yada yada at the Yellow Kid, but I suspect that the little urchins of New York might have liked seeing characters they recognized and could sympathize with.

Anyways, let's jump to 1912 and take a look at a couple of these FUN sections which are almost completely devoid of what we today recognize as a comic strip. FUN sections appealed to all readers,as many of the jokes and puzzles certainly don't seem to be aimed at children. Big thanks to McCoy (brother, where art thou?) who did these edits for me back in 2010. As per usual, he makes fragile, yellow, and tattered paper look newsstand fresh. Let me also get the mandatory PC apologies out of the way and say that these papers in places perpetrate the racial stereotypes of the day as do almost all humor publications of the era. It is what it is. Every vintage periodical is a little time machine that takes us to what can be disorienting environs. The past is a strange place that makes us richer for having visited. Try and enjoy these sections in spite of any offended sensibilities, eh?

I've got two sections from 1912 to share that were in a 16 page format and then one section from 1914 by which point the section had moved to an 8 page format. I didn't know anything about these when I picked them up to scan except for the fact that newsprint erodes and that they looked like a worthwhile project. The 1914 issue is about 6 months after the first crossword and shows the solution to crossword #22.

On to the samples! Grab the full scans for the entire experience...

The cover is by Herb Roth. 15 years after the Yellow Kid and the street scamps are still clowning on the dandies. April Fool's issue.

I must be getting old because these days I'm cheering for the old man over the pranksters. Get off my lawn!

One of the puzzle pages that would spawn the crossword. Note also the classified ads, one for a predecessor to viagra. One day, they'll cure baldness. One day.

The FUN section also had a focus on baseball. I wonder if there are any alive that could still solve this puzzle. Probably not.

I'm not exactly sure what this cartoon means, between the devil and the deep blue sea? By Jack Callahan. Sometimes it's hard to "get" the jokes in vintage pubs, as we don't connect with a joke's context.

Lastly the 1914 issue. Since it's only 8 pages, I'll put the whole thing up for the websurfers. I also want to show all this stuff in a total context, as I haven't really included any text gags yet, and I'd like to emphasize that these aren't your daddy's funny pages. Note the answer to the previous week's crossword (#22) on page 7. It looks like they've moved away from some of the larger cartoons along with the loss in pages. Love the cover. From Gus Mager.

There you have it, the publication that brought the world the crossword...

Merry Christmas, everybody. I'll catch you on the flipside, hopefully still sane after a sojourn in the holiday looney bin, perhaps around New Year's...

Posted by darwination at 7:01 PM

Reegarding the "by the deep blue sea" cartoon, I think it's a line from a song, although google didn't bring that line up for me, and the joke is that, instead of a Constant Lover, the image is of a Waiter.

Thank you so much for your generosity in sharing all of these amazing pieces of ephemera! I found you by way of the "La Vie Parisienne" collection, which is mind blowing.