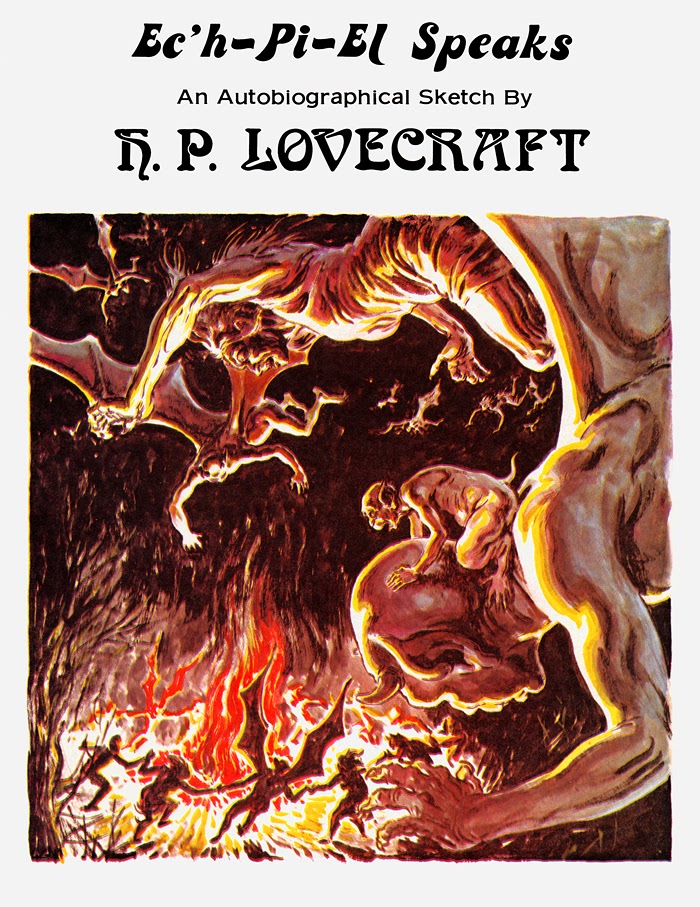 I feel a wee bit of remorse for teasing H.P. Lovecraft in my last post about his prudish attitude toward Brundage, so I thought I'd make a quick post tonight of one of my earliest scans, Ec'h-Pi-El Speaks - An Autobiographical Sketch by H.P. Lovecraft, the longest autobiographical piece that Lovecraft ever wrote.

Of all the weird fiction authors, Lovecraft has had the most influence on his peers as well as upon myriad popular and fringe cultures. There's the direct influence upon other Weird Tales authors of his circle as well as his influence on future weird writers like Stephen King and Neil Gaiman. There's his influence on film directors like Sam Raimi and Guillermo Del Toro as well as his influence on F/X design in artists like H.R. Giger (Alien, Aliens) and John Carpenter. His movies are difficult to adapt, but many have tried - I like Dagon (2001) the best of those I've seen so far. There have been countless comics adaptations including the recent Alan Moore interpretation Neonomicon/The Courtyard which plays reverently and irreverently with the Lovecraft Mythos while simultaneously teasing at the man's peculiarities (I think it's great comix. Be warned, though, it's not everyone's cup of tea. Lovecraft himself would be aghast). Classic metal musicians like Black Sabbath or the band that took his name, H.P. Lovecraft, based music on his work, just as current metal bands continue to do so like Electric Wizard or Blood Ceremony who released one of my favorite albums of this year, with a very Lovecraftian title, The Eldritch Dark. Some have even gone so far as to attribute the whole manga obsession with tentacles to Lovecraft, but I don't think he'd want credit for that :D

Since reading Joyce Carol Oates' selection of Lovecraft stories (a good place to start), I've been slowly working through his complete works. In some ways, I think HPL succeeds in spite of his prose which can be at times rigid, unpoetic, and repetitive (and at other times brilliant) because of the manic dread he almost never fails to instill in the reader. Most of the time I have no idea what I'm to be scared of (anticipation and atmosphere is 95% of good horror), yet I'm scared nonetheless. Lovecraft liked to write at night and suffered night horrors, and I think it is his uncanny ability to transmit his own anxiety to his characters and the reader that makes his stories so disturbing. He has an intense interest in modern science that exists alongside a determinedly old-fashioned sensibility. Any student of American Literature will quickly see obvious ties to Poe as well as Hawthorne and Charles Brockden Brown in terms of ancestral guilt and cursed bloodlines along with a concern with the supernatural.

Ec'h-Pi-El Speaks was published by Gerry de la Ree in an effort to separate Lovecraft's original self-examination of 1929 from August Derleth's 1933 work "Some Notes on a Nonentity" in which Derleth expands some of Lovecraft's original thoughts. The book was printed in a small pressing of 500 and has some interesting qualities. The first is the strange parchment paper it is printed on. I'm not sure I own any other books printed on this stuff. A second interesting characteristic to note is the strange singe mark at the right side of the title page. This page is about a half inch skinnier than the rest and seems to have been exposed to some sort of flame for the charred effect. Spooky, very spooky. And lest I forget to mention, Ec'h-Pi-El Speaks is accompanied by unpublished illustrations from Virgil Finlay, who I believe is the best of the Weird Tales illustrators (followed by Hannes Bok and Lee Brown Coye) and more than worthy of his own entry at some later date.

Since it's a short pamphlet (16 pages, I must not have scanned the inside front cover when I scanned this more than 6 years ago - these days I would scan the blank page to fully represent the publication), I'll go ahead and post it all here for web surfers who do not care to download the full scan (though I always recommended grabbing the actual scan for higher resolution images). I've typed about the man enough. It's time to let him speak for himself!

A Winter snowstorm is messing with my holiday plans, so perhaps I'll eke in another post tomorrow regarding the 100th birthday of the crossword which has been getting much mention in the press. I'd like my readers to be able to see what the publication that started it all actually looked like...

Posted by darwination at 9:04 PM

Welcome back! As a long time magazine collector, I've missed your excellent articles. I'll be checking your blog for more articles now that you are settled in your new house.

Thanks, Walker, and everyone else who has welcomed me back to posting. It's good to be writing and scanning again.

Even when my blog is dormant, I continue to collect and read magazines (and about magazines), but typing about them really helps some of the phantom notions circling about the back of my brain become more solid. It's a healthy stimulation I didn't realize how much I've been missing.