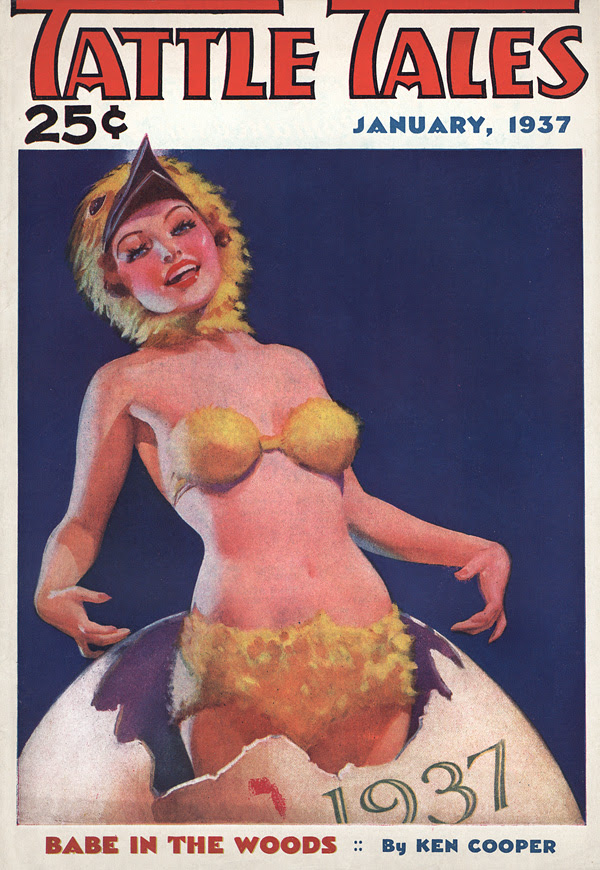 At Jack Raglin's blog on Enoch Bolles, he's posted a Bolles' girl dancing on the tabletops for New Year's, so I thought I'd post a New Year's cover of my own, surely one of the strangest girlie pulp covers in my collection.

Back when I posted the Fall 1937 issue of Tattle Tales, I mentioned H.J. Ward's girlie pulp work included some strange paintings, and this is a prime example. As the kids say, WTF. New Year's Chicken? His tenure on this particular Donnenfeld Magazine produced a number of odd compositions.

This November 1936 issue sold on eBay recently for over two hundred bucks. I've seen it sell like that a couple of times. I'll find an affordable copy one day, hrm: 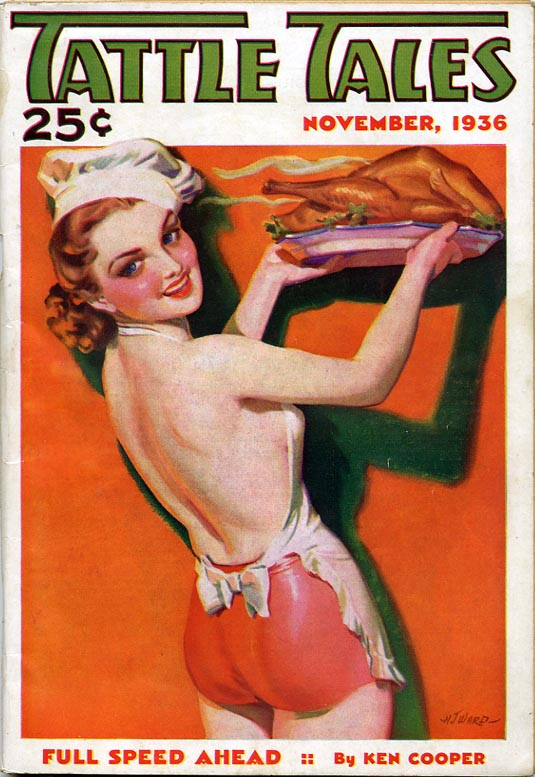 I think it's more cute than weird, but for some reason I don't find pin-ups with food all that appetizing. Definitely a classic. 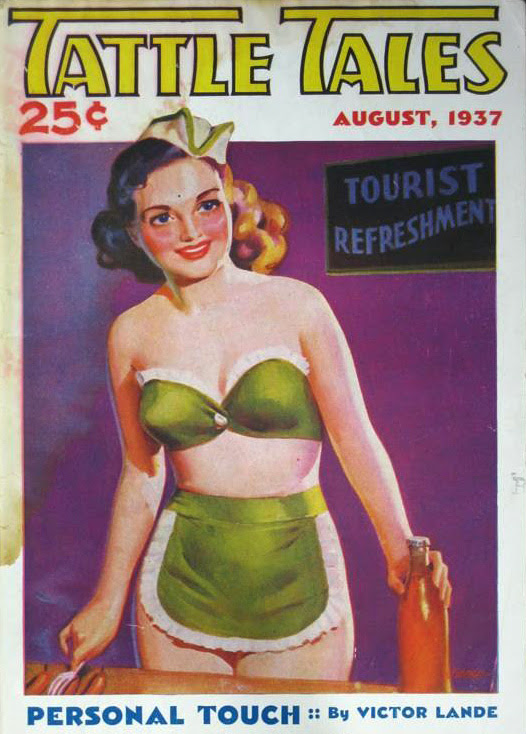 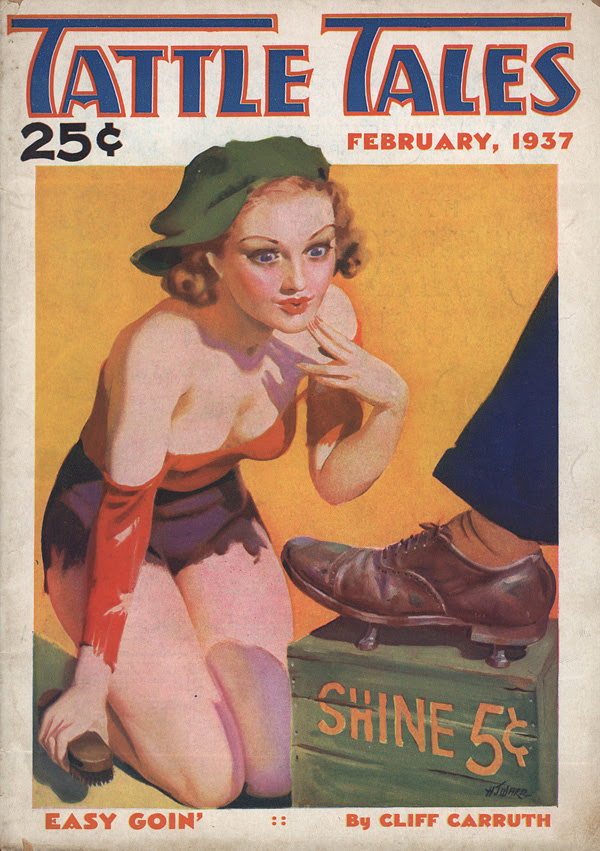 I shared this strange February 1937 cover from my collection at a yahoo group because of its bizarre nature, and somebody pointed out the fact that it might have to do with the idea that big feet mean big lovin, oh my.

Since that 2009 Tattle Tales post, a new and very well done book has come out on Ward from David Saunders, and I recommend it to fans of his work. It's the same format as his book on his dad, artist Norm Saunders, and you can get it here. David keeps up the very helpful index, The Field Guide to American Pulp Artists here.

One of Ward's oft-noted paintings, Evil Flame, sold recently on Heritage Auctions for a whopping $143,000. Robert Lesser writes about this one in his book Pulp Art. 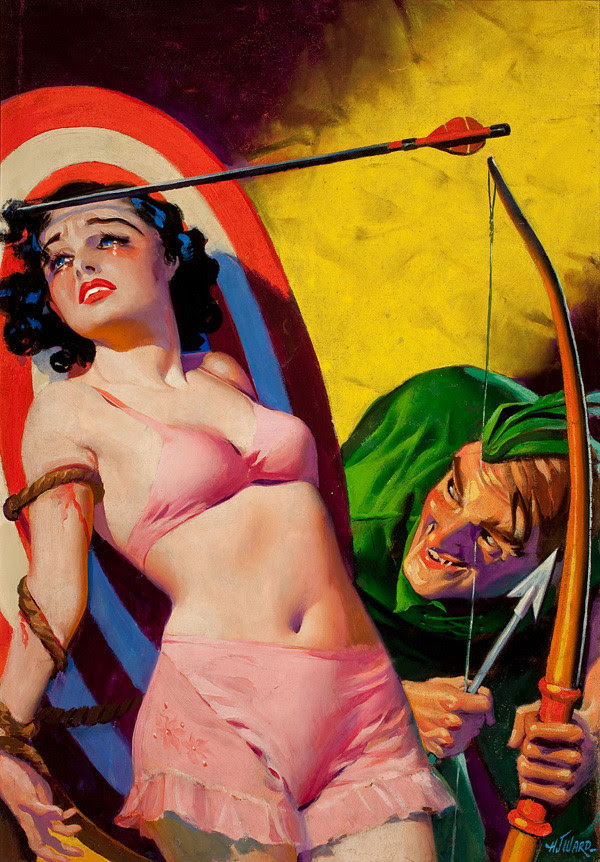 I do think it is good but prefer Ward's girlies from the covers of Bedtime Stories. Ward's excellent but often disturbing work for the Spicy line from Culture/Trojan with their girls in terror stands in stark contrast to the pin-up girls from the smoosh pulps who are in no terror whatsoever. A woman in terror is not consistent with the inviting and warm nature of the pin-up girl, for this reason (along with story genre differences) I always bristle that the Culture/Trojan spicy line sometimes gets considered alongside the girlie pulps. But I quibble...

My favorite covers by Ward for the girlies were for Bedtime Stories. These girls are lush and almost glow with innocent sexiness. This first cover comes from my fellow pulp scanner Cimmerian's collection, August 1936, fantastic: 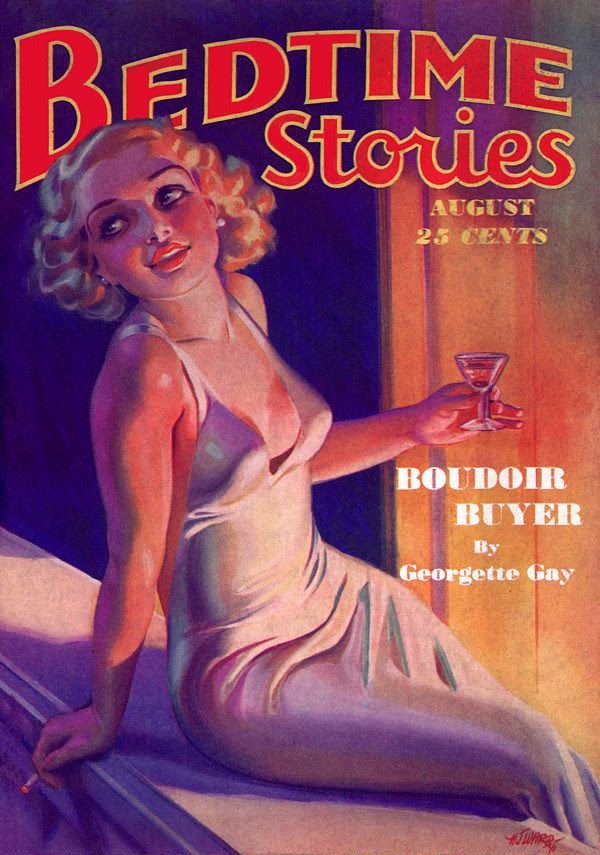 The October 1937 cover is my favorite. I love the colors and the smile on this smoking babe (from an eBay auction): 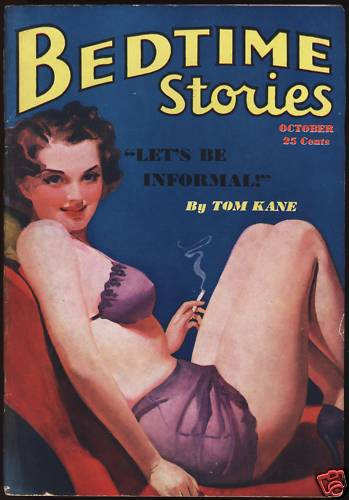 The colors on the March 1937 issue are great too: 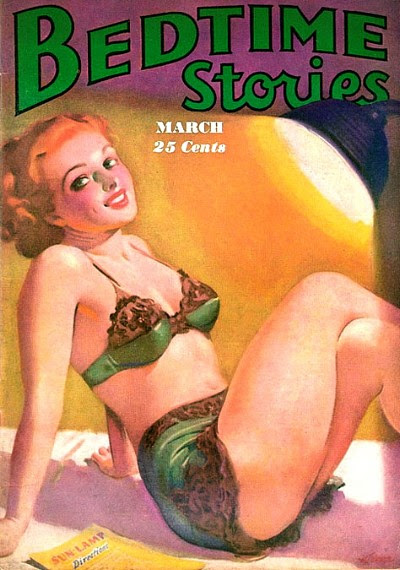 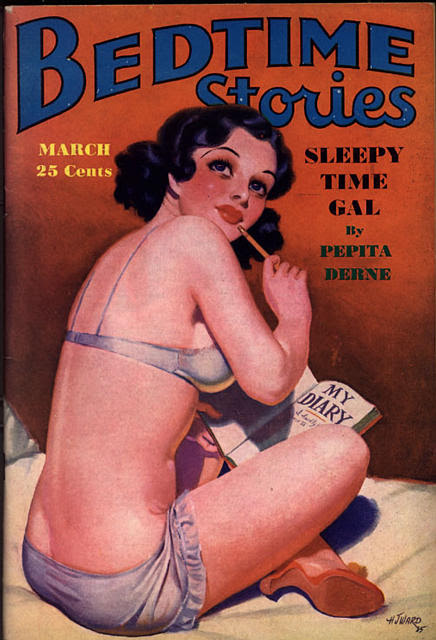 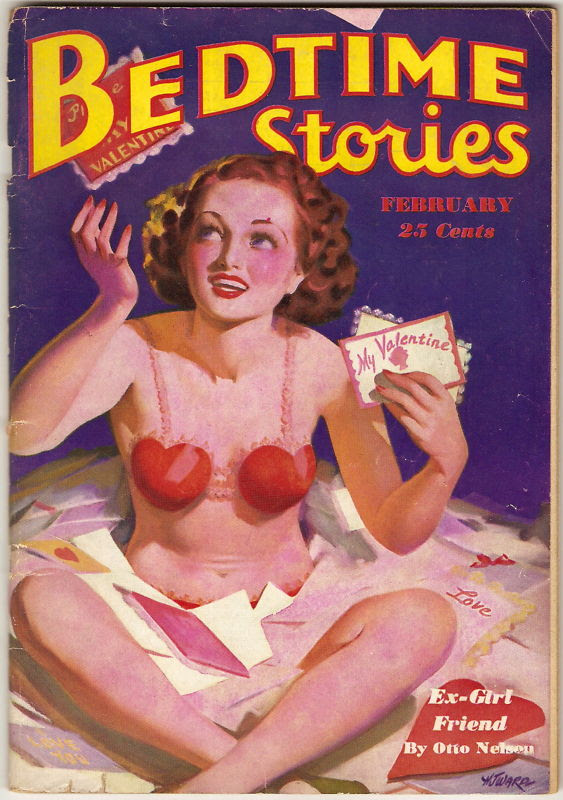 Bedtime Stories can be a bit pricier than most of the other girlie pulp titles, so I don't manage to get one very often. Here's one I'm dying to find, a most wanted pulp, the February 1936 issue. I can't peg the artist (Bergey?), but I love it. 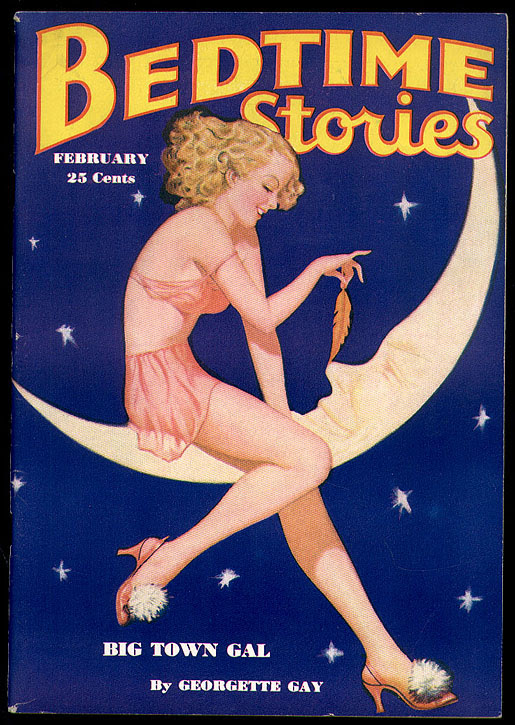 And I better not leave today without sharing a cover to cover scan!! An issue of Bedtime Stories so you all can investigate a full issue, August 1935. McCoy handled the editing work on the issue, so big thanks to him. Earle Bergey meets the pink elephants, a hung-over pinup?!? 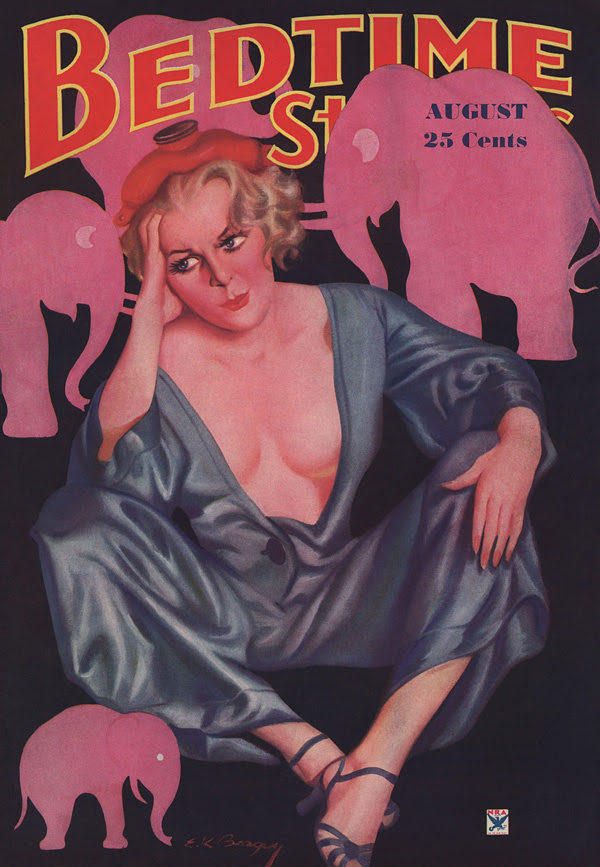 Too much of that New Year's champagne, no doubt. I've got a pal that thinks hungover girls are sexy. I dunno about that, but this blonde is a cutie.

contents and samples from the issue! 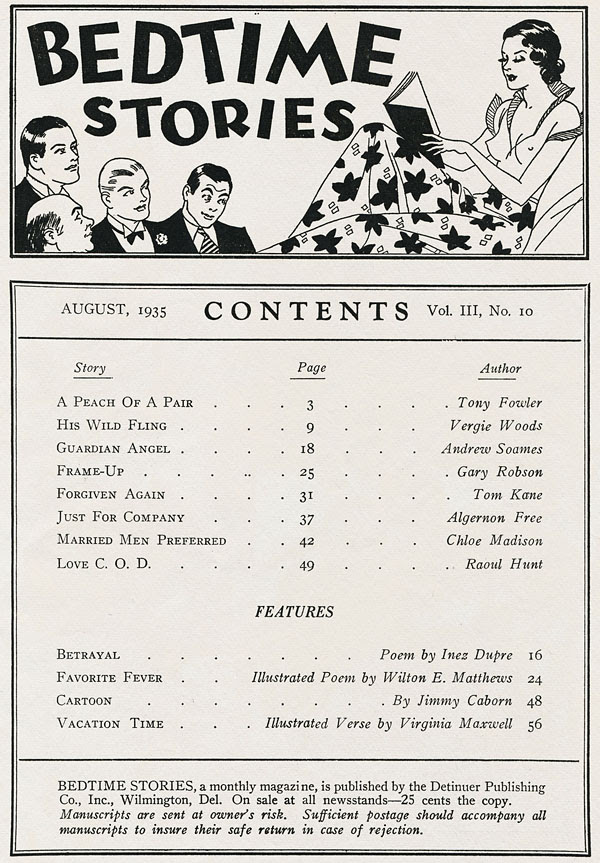 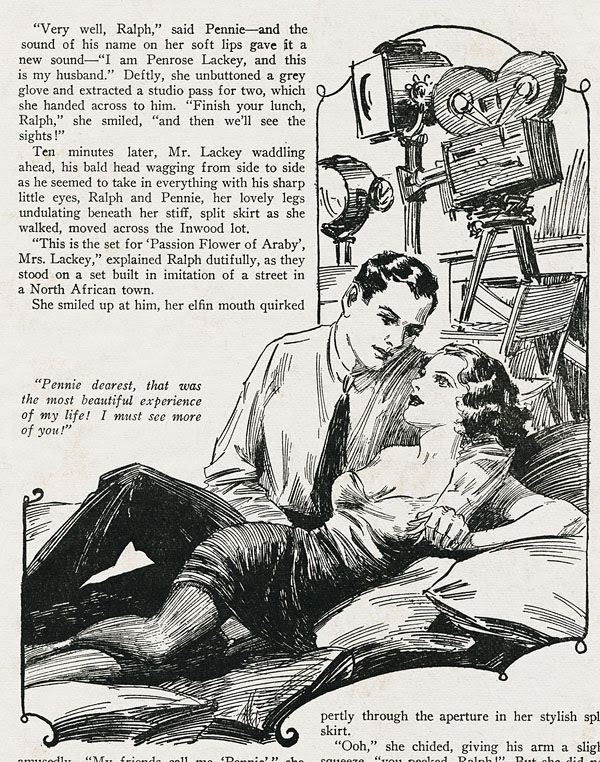 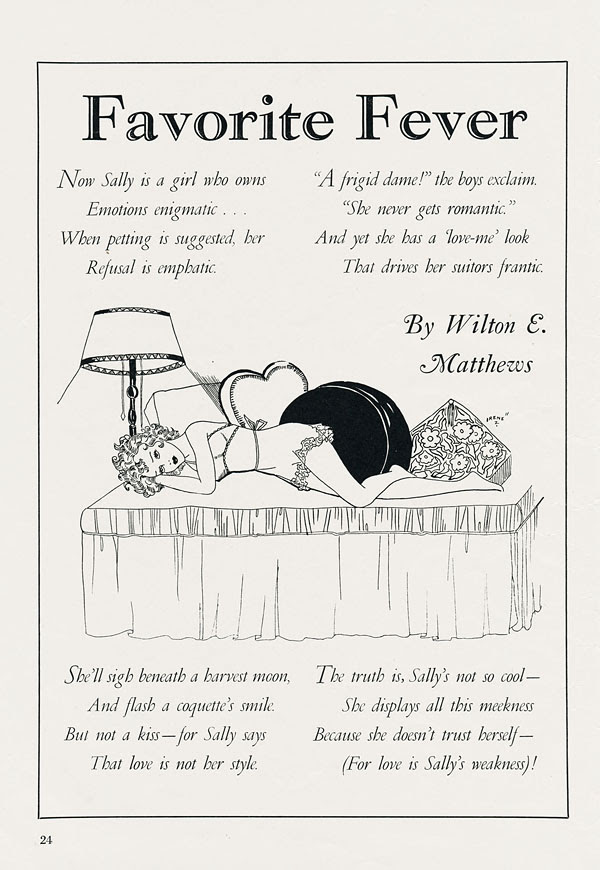 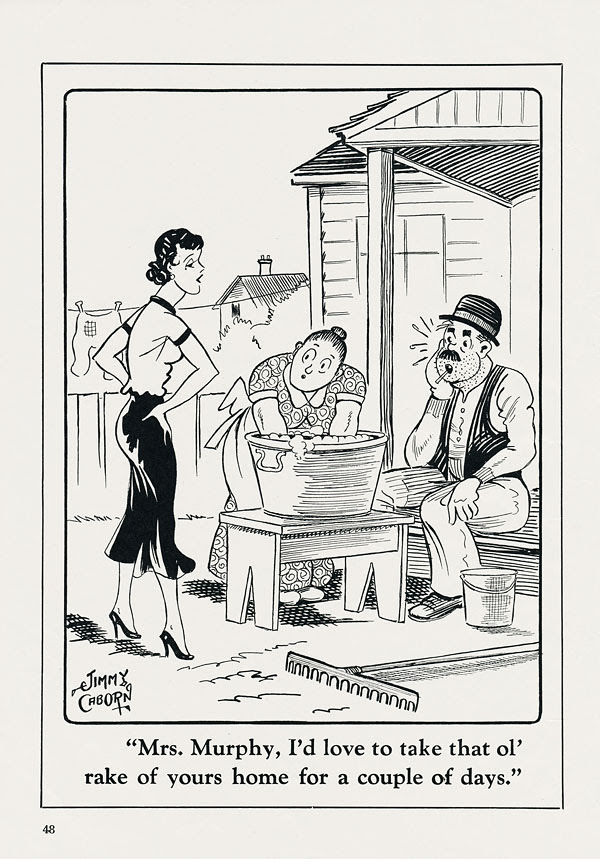 And lastly, a Bergey girl from my collection, January 1935, bottoms up and Happy New Year! 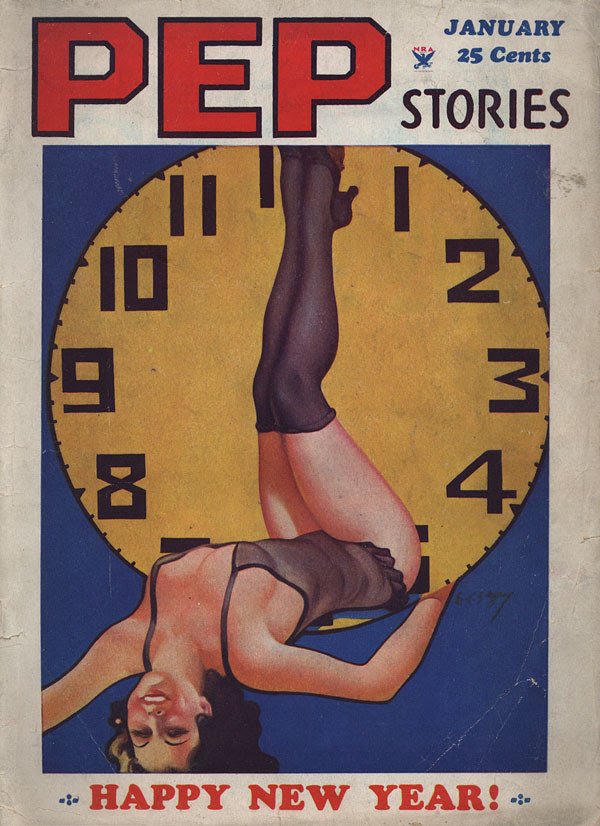 For next time, I've just re-read Francis Smilby's Stolens as I've gathered material on La Vie Parisienne. I'm finally ready to start in on a series of posts on the birth of the girlie pulp....

Postscript!!! Oh yeah, I wanted to share along with the cover I led off with today what I think this is a UK edition. Notice the differences between the covers, the details on the face. This one is probably another pressing by UK publisher pirateers. Or perhaps Donnenfeld sold coverless, returned issues overseas. Of course, he reprinted his own pulps too, so it is hard to know and this could be his own reprinting. I'll do a post sometime on UK pirate editions. The middle class there managed to suppress naughty publications quite handily, so, of course, US editions were much in demand... 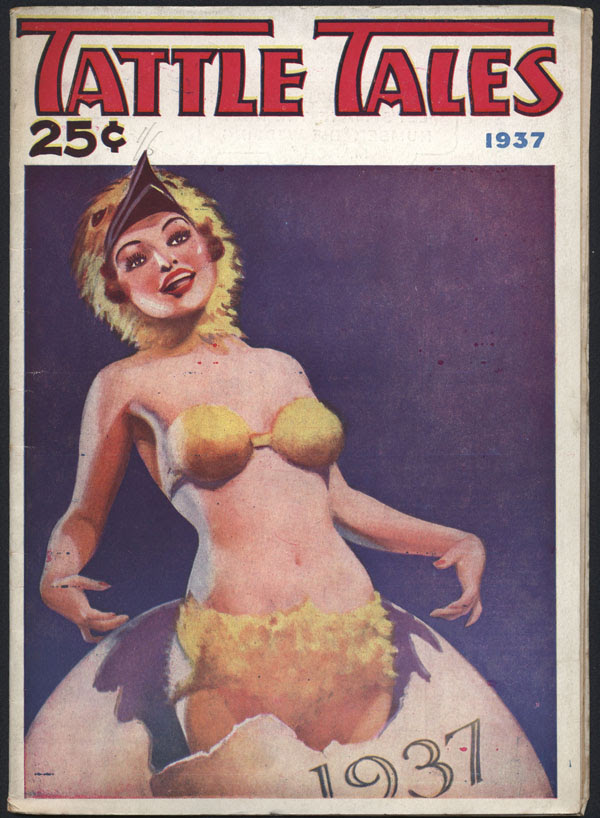 FANTASTIC job with all the scans! Thank you so much for sharing these great mags. I couldn't download the "Bedtime Stories" mag though. The link seems dead.

Thanks and you're welcome. Link replaced.

Your blog is a treasure !! Thank you so much !!